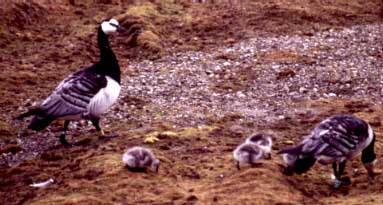 Geese are a very interesting group of birds for biological research.

HERBIVORES
They have to be highly selective in their feeding choice because there digestive system is relatively simple. With their grazing, they can have a complicated interaction with the vegetation, stimulating regrowth by their droppings and changing the composition of the sward.

MIGRATORY
They are migratory birds, needing a long period of preparation and fattening. Decisions on optimal timing are dependent on the situation in a chain of stop-over sites.They flock and concentrate in well-defined areas.

LARGE
Geese are large birds, which allow individual coded rings or neckbands. They are big enough to carry devices like satelite transmitters and they are not to much stressed by handling. Geese are easily kept in captively which makes various experiments possible.

SOCIAL
Geese are social animals. Within flocks there exist a dominance hierarchy. The birds are monogamous and the offspring stays with the parents for almost a year. Learning is vey important and determines the behaviour of the individual.

VARIATION
There is a lot of variation between species in their ability to utilize specific food types and to survive predation. Not only between species, but also within species variation is recognized in individual based studies. 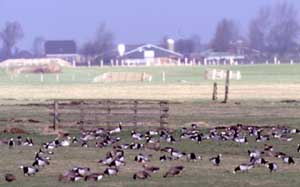 APPLIED SCIENCE
Geese compete with farmers on agricultural land and the distribution of the geese is largely affected by the management of the feeding areas. With the population increase, the conflict with agriculture has been intensified. Much research is focussed on alternative methods to decrease the damage.